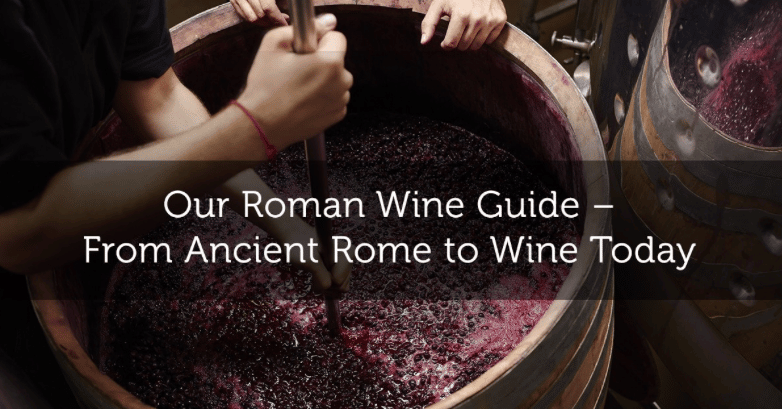 “Wine prepares the heart for love, unless you take too much.”

“Wine is a perfect cure for heaviness and sorrow.”

In most of the charming, traditional ‘Trattorie’ and ‘Osterie’ scattered throughout the city, it’s hard to come by a table that doesn’t proudly display a bottle of wine, or a carafe of (surprisingly good, comparatively!) table wine. This fun, unpretentious attitude that Romans have always traditionally maintained with wine, will never vanish and it still greatly contributes to the classic Roman image of a colorful, somewhat chaotic, yet fun, romantic city. However, this down-to-earth attitude towards wine also produced the more negative effect of a market accustomed to drinking low-quality mass-produced wine, with very little consideration for quality.

Only in recent years, in part due to the efforts of small producers from the surrounding areas who focus on quality rather than quantity, but also because of the growing curiosity towards wine from today’s younger generation, Romans have finally started to get in touch with the idea of drinking quality wine. Many classic establishments are also starting to understand the importance of providing quality wines to accompany the traditional local cuisine, as opposed to the bland fare that was the standard for years. It is now easy to walk into a wine bar or restaurant in Rome, and choose from a large variety of good quality wines, Roman, Italian or even international, by the bottle or by the glass.

By the way, here are a couple of insider tips: if you’re interested in ordering a bottle of wine in a Roman restaurant or bar, ask for ‘la carta dei vini’, or, if you just wish to order wine by the ‘bicchiere’, glass, you will have to check the ‘mescita’ list (often found at the beginning of that same wine list or on a black board). The wine will most likely be served in elegant wine glasses, far removed from the traditional small stemless water glasses that you might still catch your eye in vintage Italian movies and photos. This might seem like a small detail, but it is symbolic of the changes that are taking place between Romans and their relationship with wine culture. Romans are unpretentious by nature, and while this can be an appealing trait, they are known to be suspicious of change. Any option that varies from the standard or ‘traditional’ way, takes time to be viewed favorably, but once they jump on board, Romans will always do things with pride and passion.

Rome today is a truly exhilarating place to be when it comes to tasting wine, from a local Cesanese to a prestigious Barolo, or from a fancy Champagne to a nerdy natural wine, the choice is yours!

Grapes and Wines of Rome

“It warms the blood, adds luster to the eyes, and wine and love have ever been allies.”

In Lazio, there are three DOCG wines and 27 DOC wines in total, but if we focus on the province of Rome, there are two DOCG wines, and eighteen DOCs. Unfortunately, the quality of many of these is not always of the highest level, and we would recommend most of them only if you are curious to experience wines that have been consumed at Roman taverns for hundreds of years, without seeking anything too exciting or complex. They usually are very simple and nondescript wines. The two DOCGs, Cannellino di Frascati and Frascati Superiore, come from the Castelli area, on the outskirts of the capital. It is an area known mainly for its white wines, in fact, the white Frascati wine was the first white wine ever in Italy to gain a DOC status in 1966. The predominant grapes that are used in the Frascati blend are the Malvasia del Lazio, Bombino, Trebbiano Toscano, Malvasia di Candia, Greco, and Bellone (also called Arciprete or Cacchione). After many years of underwhelming wines, we are pleased to mention that there are finally a few young talented producers that are trying to elevate the quality and reputation of the area. In particular, we would like to suggest the wines of Cantina Ribelà and Marco Colicchio. Both young producers make wines that are the antithesis of the mass-produced, industrial low-quality wines that still dominate the Castelli scene. Also worth mentioning are the Marco Carpineti biological wines from the Cori area, where the main local varieties are the white Bellone and the red Nero Buono grapes.

Cesanese, the grape, and the wine

"It has become quite a common proverb that in wine there is truth - In Vino Veritas."

The main excitement for the wine world in the proximity of Rome is currently coming from an area of three little hill top towns about an hour drive south east of Rome (when traffic isn’t too ‘Roman’ that is!), near the Apennine mountains: Piglio, Olevano Romano and Affile, who make up for the domain of the red Cesanese grape variety and wine. The name Cesanese derives from a small town just south of Rome called Cesano.

There are two main Cesanese varieties: Cesanese Comune and Cesanese d’Affile. Instead of being different biotypes of the same grape, they are actually two different grape varieties sharing the same name. The Cesanese Comune can be found scattered all over Lazio, although predominantly in the south, whereas the Cesanese d’Affile, with much smaller berries, is native to the area around the three hilltop towns mentioned above (but with Affile being one of them, you might have already guessed that). The Cesanese d’Affile is considered the higher quality grape, but it also prefers to grow at a higher altitude, like the little towns in the hills leading up to the central Italian mountain rig. Both Cesanese varieties have trouble ripening, although the Comune is somewhat less demanding and easier to work with, and therefore the more common one, hence its name.

Like all wines from Lazio, Cesanese has to fight for a better reputation after historically being produced as a low quality ‘nobody cares’ wine. But recently, the more quality focused dry red Cesanese wines produced by driven young producers from much reduced yields, are a real contender for the Italian wine hall of forces-to-be-reckoned-with. A good Cesanese wine is elegantly rustic, with a slightly spicy and earthy backbone, though excelling in aromatic fruitiness (like ripe red cherries for example), whilst not being too tannic or dark. When in Rome, it is the perfect wine to pair with our traditional Roman pasta dishes, after all: what grows together, goes together. Try out some of our recommendations below, you won’t be disappointed!

Our recommendations in the Cesanese area

Originally a truck driver, Lorenzo Fanfarillo converted to winemaking at his wife’s small family estate in the hills surrounding Olevano Romano in 2000 (first vintage 2003). As a first generation self-taught winemaker, his open-minded approach and plenty of TLC in the vineyard result in four mono varietal Cesanese wines with a truly unique expression of this grape. His two unoaked versions are the pleasantly fruity Terre Olibani and the more complex Consilium, aged in used oak barrels is the softer Sigillum, and only made in specific years is his sweet late harvest vintage Olevano label. His late ripening Cesanese grapes give an earthy, woody (not to be confused with oaked) backbone to his wines, which requires them to age in the bottle for a few years before they reach their right expression. Don’t worry, Lorenzo does the aging for us and only releases his vintages after years of maturation at the winery. Just give the wine some time to breathe after opening a bottle, to let it come to its senses after its extensive beauty sleep, and you cannot be but pleasantly surprised by these wonderfully complex Cesanese wines.

Mario’s grandparents bought a small plot of land near the town of Piglio in 1946, just after WWII, and planted it with grapes. It’s from them that Mario learned the trade and with his natural philosophy towards winemaking, he is producing some real local gems. He’s got a line of all natural wines (so unfiltered, no sulfites added and fermented with natural yeasts) called Monocromo: white, orange, rosé and red. Plus some traditional-bordering-on-natural interpretations of the white Passerina grape variety and of course the Cesanese. Two unique things you can find in his vineyard: the ruins of an ancient Roman well, once used by the legions stationed down in the valley, and an unique and unregistered grape variant called Nostrano. His Terra Rossa wine might name Cesanese as the only grape, as unregistered varieties aren’t allowed on the bottle, but it’s a beautiful blend with a grape growing only in his vineyard. Mario Macciocca’s wines are positively interesting and educational, whether you’re a fan of natural wines or not.

Lorella Reale and Piero Riccardi form a true power couple in the Olevano Romano area, working completely biodynamic and taking advantage of the 2 different soils than form a visible natural division in their family vineyard. One soil is of a red volcanic composition, the other part is made up by white sandstone, giving the Cesanese grapes both a completely different character. Their entry level Collepazzo wine is a blend from grapes from both soils, while the Càlitro is made from grapes that grow on the white soil, and Neccio is produced from the Cesanese that grows on the red volcanic soil. The wines are sophisticated and high quality. If you are curious about the impact of different soils on a wine, these wines are not to be missed. They also produce a charismatic rosé (Cesanese), and they recently introduced a new orange wine, a blend from Malvasia and Riesling grapes.

The Alberto Giacobbe vineyards are located on both of the two main Cesanese areas of production. In order to distinguish the wines from these areas, he bottles two of his red wines under different names - the DOCG Piglio wine is called Lepanto, and the DOC Olevano is called Giacobbe, both 100% Cesanese di Affile grapes. The winery was founded in 1939, and since 2008 Alberto has taken over wine production. His wines display an appealing unpretentiousness and fruitiness, that makes them very food friendly. They pair especially well with straightforward Roman dishes such as pasta cacio e pepe and amatriciana.

Damiano Ciolli is one of the most celebrated Cesanese producers. A fourth generation winemaker based in Olevano Romano, he only produces two wines, both made from 100% Cesanese Di Affile grapes. Cirsum is the flagship wine, a complex and structured wine that displays cherry and raspberry notes, with tobacco-like undertones. It is surely one of the most impressive and elegant Cesanese wines available on the market. Their second wine, Silene, is the lighter, more floral wine of the two, but it still packs a punch of flavor and remarkable length.

“No poems can please for long or live that are written by water drinkers.”